In praise of Altered States:

Altered States genuinely moves forward in laying a path for new, insightful, and valuable information on the American Buddhism that is developing in our global society. Osto’s groundbreaking research will be appreciated by scholars, and his accessible style will be enjoyed by non-academic readers.

Altered States deftly guides us through the neglected territory of psychedelic Buddhism. This is a fascinating story, full of vivid characters and supported by solid research. Still, I believe it makes a greater contribution in situating these practices and persons in the larger contexts of tantra, of American religion, and of cutting edge neuropsychology and consciousness studies. The result is―to use le mot juste―mind blowing.

[Altered States] mixes statistics and surveys, historical overview, personal experience, and ethnographic texture to uncover the intertwining history of two fast-growing movements in American spirituality…. This overview will appeal to anyone interested in Buddhism, psychedelic possibilities, and understanding how both are forging a controversial new American religious experience.

Provocative…. The book is worth buying, reading, and quoting.

The topic of psychedelic Buddhism remains both necessary and deeply vexed. For some Buddhists, the idea that psychedelics might have something positive and productive to do with dharma practice approaches heresy; for others—especially in the West—psychedelics have not only served as a “Paisley gate” into the dharma, but remain an ongoing touchstone of practice, view, and energetic insight. While some writers have ventured into these controversial waters, treating both historical and philosophical issues, Osto is the first serious scholar of Buddhism to look closely and impartially at what is arguably the pragmatic crux of the issue: how psychedelics have functioned in the lives and minds of contemporary Buddhist practitioners.

One of my favourite aspects of the book [Altered States] was the luxurious space given to the fascinating voices of the informants themselves…. it surely took a deft touch for Doug to make the space for these articulate and diverse voices to be heard. Simply put, Doug has the tact and wisdom to know when to get out of the way and let his informants speak for themselves, and their frank, in-depth disclosure and self-portraits have a powerful cumulative effect. I also couldn’t help thinking as I read that the field would be enriched if this sort of fruitful encounter between scholarly and practitioner perspectives could be multiplied.

Altered States is an unprecedented scholarly examination of the role psychedelics have played in the past, present, and future of American Buddhism. It heralds the genesis of a new field of Buddhist studies within the burgeoning Psychedelic humanities. More personally… Doug’s book, like Allan Badiner’s Zig Zag Zen before it, has been as a validating force for those of us who view psychedelics and Buddhism as complementary.

Altered States is a valuable and timely book. What Osto has done is to open the conversation he wishes to have through providing insight into how some Buddhists (and others) have used entheogens as an adjunct to their spiritual practice within the context of the somewhat overlapping history of psychedelics and Buddhism in America.

Osto’s book is exceptional in its ability to focus the conversation about entheogens within religious perspectives contrastive to the Protestant regime that culturally underwrites American religion….The book’s most important insight is the fact that, over and over again, psychedelic enthusiasts refer to initial use of psychedelics as “door-opening” – and from his account of a Buddhist perspective, whether or not one continues to use psychedelics or feels he or she has “graduated” from such experiences, the door-opening metaphor persists in individuals’ accounts of their experiences.

Altered States is a book that could be adopted as a text in a class on American Buddhism or in courses that focus on drugs in history and the use of psychoactive substances in religions. It not only pulls together information on the subject from otherwise scattered sources, but also contributes original data and ideas. In addition to its potential as a course book, it is engaging writing that may appeal to general curious readers.

Altered States brings Psychedelic Dharma out of the shadows for the first time in decades.  It does so by highlighting the human stories & perspectives of those who have been working to hybridize dharma practice and the ritual use of psychedelic compounds. 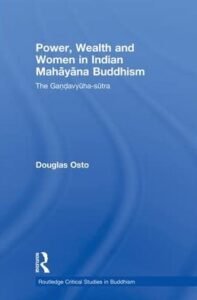 [Their] work [Power, Wealth and Women] will also undoubtedly serve as an excellent introduction to the Gaṇḍavyūha and a welcome resource that both surveys and complements the literature already available for the study of this fascinating scripture.

…this book [Power, Wealth and Women] is a must-read for graduate students and specialists interested in debates regarding the origins and nature of Mahāyāna Buddhism in India.

For full academic reviews of this book, see: